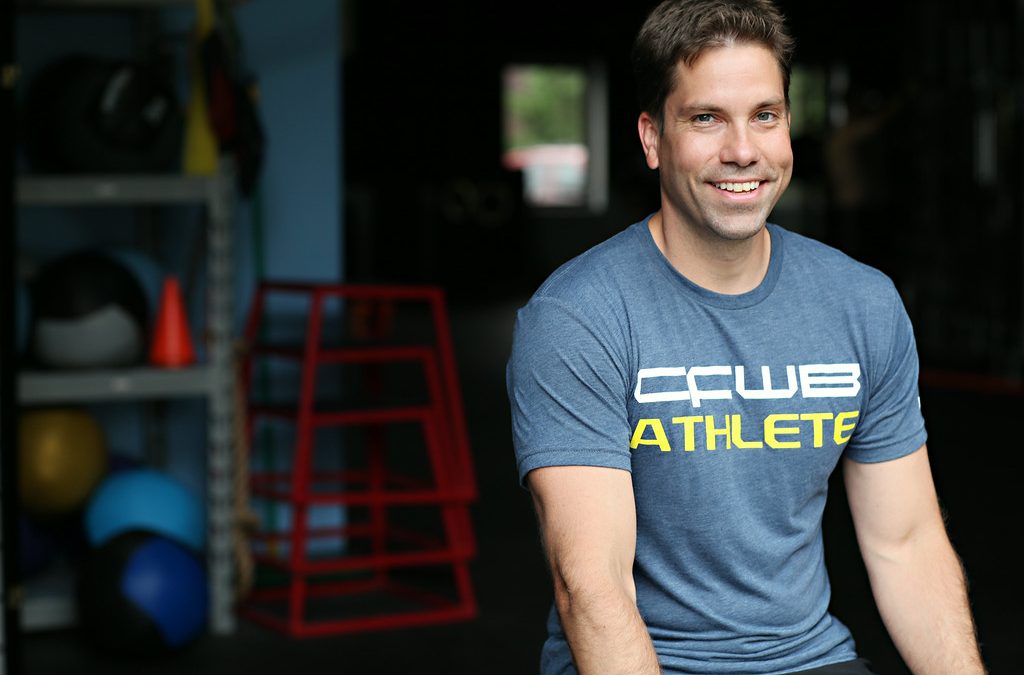 What is your occupation?
I work for Macalester College as their Director of Facilities Services.  I oversee the maintenance, operation, and construction of the physical assets (buildings, equipment, and grounds); as well as, security and environmental health and safety.

What was your first thought when you walked in the door? And now?
There was a class going on, it was noisy and people looked like they were in pain.  I thought, ”What’s with the dude not wearing a shirt?  And, what the hell did I get myself into?”  –  I also thought, “Awesome, they have climbing ropes!”

Now I’m just anxious to see who I’ll be WODing with.  I like to show up a little early to do some stretching, talk with others about the WOD, and get myself in the mind frame to work.  I look forward to the WODs after a day at work.

How have you seen yourself change – mentally or physically since you joined?
I feel like I’ve experienced big changes both physically and mentally.  Physically, I’m a lot leaner and stronger.  I weigh 10 lbs less than when I started and all of my lifts have improved big time.  Mentally, I’m a lot better in tune with my body and what it can and can’t do.  I’m better able to push myself to my limits.  I’ve done things at CrossFit White Bear that I didn’t think I was even capable of doing.

Were you active prior to CrossFit? If so what did you do and how do we differ?
I was an active runner and worked out with weights at home.   I’ve run a lot of races for fun, including a couple of marathons, and I’d been lifting for years.   I was at a point where I was no longer able to push myself in my training.  My lifts were all way down in weight and I’d decided I wasn’t interested in running any more than 5 miles at a time.  I was burned out and unmotivated.

What we do at CrossFit White Bear is so much better!  I find that training with other people really helps me push myself a lot harder.  The variation in WODs ensures that working out doesn’t get boring and it keeps me from stagnating in my training.  The advice I’ve gotten from all of the coaches has helped immensely.  I had developed a lot of poor habits over the years and relearning things the right way has been rewarding.  I’ve been a CrossFit White Bear member for more than a year and half and I still haven’t plateaued.  I was never able to sustain meaningful strength gains over the long run training on my own.

What has been the most challenging part of CrossFit?
Double Unders!@#$#%

Least favorite is definitely double unders, but that’s only because I’m bitter about not being able to do them.  If I ever figure them out, I’ll probably like them.

What has been the most humbling moment in CrossFit? And the most gratifying?
How do I pick just one?  In some ways every WOD is humbling.  They are always harder than I think they are going to be!   The most humbling period for me was the first three months of doing CrossFit.  When I started I thought that I was in decent shape….little did I know.  I literally felt like my body was falling apart some weeks I was so sore.  I remember coming to the realization that my body is almost forty years old, not twenty-five, and having to admit that I have some physical limitations that I didn’t used to have.  That was very humbling and it made me take a step back and start scaling the workouts to better match my fitness level.  It also made me start listening to what the coaches were teaching.  Dropping the weights, concentrating on my form, and practicing some of the more challenging movements paid big dividends in the end.

The most gratifying was a 315 back squat!  Three plates!  –  It was also very gratifying to finally figure out (with a lot of coaching from Tania) how to use my hips in the Olympic lifts.

Anything else you would like to add?
Just that CrossFit White Bear is a great community.  I am continually surprised by the quality of the coaching, how easy it is for new people to join the group, and how much fun everyone has doing what we do.  There is something about doing physical work together that bonds people together.

This site uses Akismet to reduce spam. Learn how your comment data is processed.